Associate Professor of Internal Medicine and Molecular Genetics and Microbiology 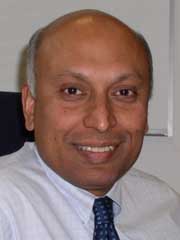 As the global fight against both cancer and AIDS continues, Sankar Swaminathan has emerged as an expert on both as they relate to common viruses.

Over the past eight years, Swaminathan has spent most of his time in UF’s Department of Medicine discovering new ways to combat such viruses. His research in viral oncogenesis focuses on two particularly infamous cancer-related herpesviruses-Epstein-Barr Virus and Kaposi’s Sarcoma-Associated Virus. His reputation as an expert in the biology of cancer-causing viruses has earned him international respect, and he has been invited to a number of symposia, workshops and meetings to discuss herpes, AIDS and other immune deficiencies.

Swaminathan published one of the first papers on in vitro mutations of Epstein-Barr Virus, a herpes virus linked to mononucleosis that infects most people at some point in their lives. His work is regarded as a key component in the foundation of Epstein-Barr virus research.

Swaminathan’s research in Epstein-Barr led him to the study of a gene in Kaposi’s Sarcoma-Associated Virus, also known as the eighth human herpesvirus, which commonly causes cancer in AIDS patients. He was one of the first to clone the ORF57 gene, which he demonstrated was required for the replication of Kaposi’s Sarcoma-Associated Virus. He similarly uncovered many of the mechanisms of the related gene responsible for the replication of Epstein-Barr Virus. Swaminathan’s work in these two areas identified him as a leader in the study of viruses and cancer.