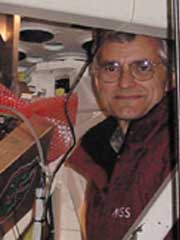 Charles M. Telesco’s internationally recognized work with infrared instrumentation and astrophysics has helped propel the University of Florida’s Department of Astronomy into the top tier of astronomy programs in the country.

Since his arrival at the university in 1995, Telesco has focused his research activities on forging a world-class laboratory at UF for the development of cutting-edge astronomical infrared cameras and spectrometers and using that information at the world’s leading astronomical observatories to understand the formation and evolution of stars and planets.

Armed with the knowledge that mid-IR astronomy is on the verge of an explosive expansion, whereas mid-IR instrument developers are relatively rare, Telesco concentrated his research efforts on developing a mid-IR science and engineering team. As a result, UF’s Department of Astronomy is now a leader in supplying IR instruments for giant ground-based telescopes at the world’s most renowned observatories, and has gained access to those facilities as well.

These IR instruments operate at wavelengths that make visible thermal radiation from dust particles that have been warmed by a star’s light, and imaging with state-of-the-art mid-IR cameras can show how the particles are distributed. In some circumstellar disks these dust particles are coalescing to form planets, or are evidence that planets have already formed. These features hold valuable clues to the presence of planets and their evolution.

UF’s first mid-IR imager and spectrometer, called OSCIR, has been a resounding success. In spring 1998, Telesco was awarded precious observing time at the Cerro Tololo InterAmerican observatory in Chile and at the Keck observatory in Hawaii to use OSCIR on their telescopes, which resulted in the best observations ever recorded of the very young star HR 4796A. The discovery of a disk of dust surrounding the star, in which planets are probably now forming, made the cover of Newsweek magazine and garnered for UF astronomy enormous recognition among both scientists and the public.

“With these [IR instrument] projects, we are sharpening our skills, establishing our reputation, supporting our science and creating an unusual educational environment where our students can see first hand how an astrophysics idea, such as the search for other planetary systems, can be translated from little more than a dream into real hardware with which to make discoveries,” Telesco says.

Most recently, Telesco has signed a $2.2 million contract to create another version of OSCIR for a 10-meter telescope being built in the Canary Islands – this one will be called CanariCam. In exchange for providing such an instrument, UF astronomers will most likely be privileged to several weeks observing time before anyone else has access to the telescope.