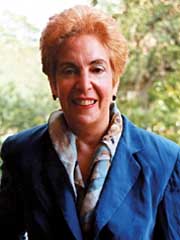 As the author of the critically praised book, The Films of Oshima Nagisa: Images of a Japanese Iconoclast, published in 1998, Turim explored the politics of desire in Japanese films, the representations of women in Japanese society, and the impact of formal experimentation.

Since then, her research has focused on bringing together philosophical and psychoanalytic investigations of desire with a new approach to feminist concerns. Turim studies traditions that exclude women from acting on desire. her approach uses deconstructive methods to question universals and assumptions.Her upcoming fourth book is Desire and Its Ends: The Driving Force of Cinema in Relation to Literature and Art.

“Here I examine what might be gained by reworking a Hegelian schema, ‘man’s desire is the desire of the other,’ by considering Melanie Klein’s notion that a child desires above all else to make him or herself understood,” Turim says.

A UF professor since 1992, Turim also studies desire’s exploitation by consumer culture and the ways artistic form functions historically. She teaches undergraduate and graduate courses, including Narrative Form in Film, Women and Cinema, and Films of Godard. She will be offering courses and site coordinating for the next two summers at UF’s new Paris research center.