Professor of Medicine and Physiology 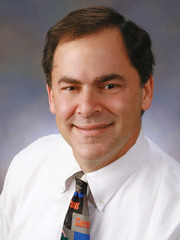 “As a clinician and a scientist, I have learned that effective treatment of human disease requires a fundamental understanding of the mechanisms used by the human body to respond to common clinical conditions, and then using this understanding to direct treatment regimens.”

Until recently, scientists and clinicians incorrectly assumed that cellular ammonia transport involved passive diffusion. Weiner demonstrated that specific proteins, known as Rh glycoproteins, mediate critical roles in renal and extrarenal ammonia metabolism. “My laboratory has played a major role in revising the previous paradigm by examining the expression, transport characteristics and regulation of these proteins,” he says

Edward Block, chair of the Department of Medicine, notes that the protein family Weiner is studying was unknown five years ago.

“He is a world leader in this field and has published [on this issue] in more journals and more extensively than any other investigator, not just at the University of Florida, the State of Florida and the United States, but internationally,” Block says.

Weiner’s research also extends beyond kidney disease. His work in liver and intestinal function has important implications for understanding hepatic encephalopathy, a common and disabling condition that causes recurrent coma. His work related to the stomach has implications for the pathogenesis of peptic ulcer disease.