Zhenli He, professor and associate director at the UF Indian River Research and Education Center in southeastern Florida, studies the impact of industrial agriculture on soil quality and the environment and how new fertilizing practices can help farmers grow crops more sustainably.

The center, also known by the acronym IRREC, is part of the Institute of Food and Agricultural Sciences at UF and was founded in 1947. Researchers there study key environmental issues in Florida and lead extension and education programs to make their findings publicly accessible. He, who has led the Soil and Water Science Laboratory there since 2004, studies how the accumulation of excess nutrients in soils impact crops to develop targeted fertilization strategies that can help conserve Florida’s waterways and cut costs for farmers.

“Most of our research focus is on how to enhance or increase the use efficiency of fertilizers by crops and to reduce the loss into the environment,” said He, who has won grants totaling more than $5 million. “So we have two goals: One is to reduce the production cost for farmers and another is to save our environment. But it’s not an easy issue to resolve.”

Mild winters and abundant sunshine give Florida a nearly year-round growing season. But nutrient-poor sandy soils mean that fertilizers play a crucial role in supporting the state’s strong agricultural economy, said He. Frequent rains can wash fertilizers into surrounding lakes, rivers and streams, saturating aquatic ecosystems with nutrients that can induce explosive algal blooms that stifle waterways. Heavy metals, such as arsenic and copper, can also accumulate in soils and eventually poison crops – especially in Florida’s citrus groves, often planted in soils that have been farmed on for generations.

He is also collaborating with horticulturists and chemists at UF to create a fertilizer and pesticide delivery system that uses nanoparticles – extremely tiny bits of matter with unique properties due to their small size – to sense when a plant needs nutrients, allowing for targeted chemical delivery and a “smarter tool for applying fertilizers and pesticides,” He said.

He, a mentor to new faculty members at the IRREC, added that international collaborations have broadened horizons for new generations of soil scientists. He arrived at UF in 1997, and has supervised and trained more than 50 students, postdoctoral researchers and visiting scientists from around the world in his lab.

“Since we work at a university, we’re not just scientists – we’re educators,” said He. “Some students from my lab are already professors, and they are starting to send their students to come back to my lab for the second generation. It’s not just a younger generation of scientists, it’s a future society that can build a better environment, better quality food and the highest standard of living.”

Learn more about He’s work at the IRREC.

He was recognized as a UFRF professor in 2009 and 2015. He is also a courtesy professor at Zhejiang University in China, where he earned his bachelor’s degree, master’s degree and Ph.D. 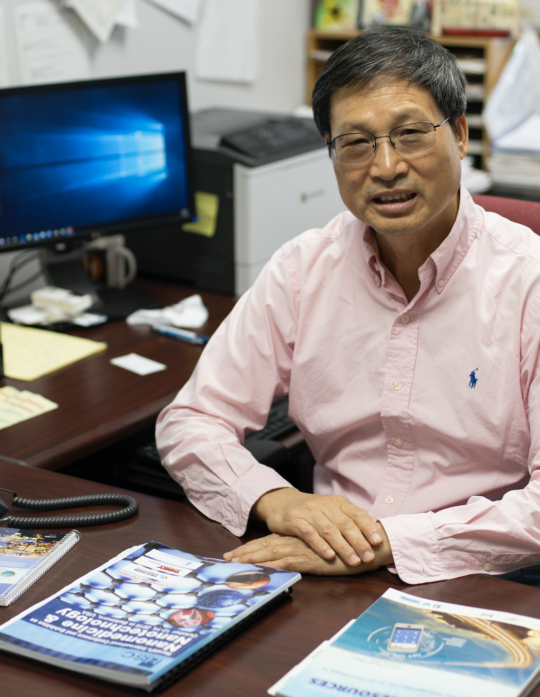